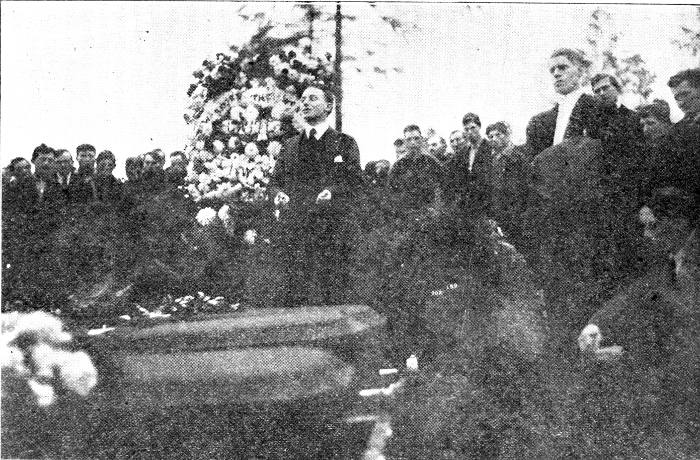 Ashleigh (left, speaking at the funerals of three martyred Wobblies in the USA) was already interested in radical politics when he emigrated from Britain to Argentina as a very young man in 1909, where he worked on a railroad. In September 1912 he moved to the USA, where he joined the syndicalist “Industrial Workers of the World” organisation (IWW) some two months later. He travelled extensively throughout the United States over the next few years, finding employment with a local newspaper in each town he visited, so as to keep himself as he went along, and conducting lectures on socialism in his own time.

Much of this experience is recounted in his autobiographical novel, `Rambling Kid’, which was first published in London only in 1930, although, astonishingly, it did not come out in an American edition until 2004.

Ashleigh testified for the defence at the government trials of Bill Haywood and other IWW members in 1917 and 1918. He himself served a three year jail sentence in Leavenworth Penitentiary, USA, after the trial of nearly one hundred “Wobblies” (IWW members) in Chicago in 1918. He was himself deported from the United States to Britain shortly after his release in February 1922.

He visited the Soviet Union in 1922, where he began work for the Comintern. Although, almost immediately, after M N Roy wrote to the British Party in August asking for someone to be sent to India to assist in the establishment of a revolutionary party there, the Comintern sent Ashleigh out as its representative. Under the alias Danda Lal, he was arrested and deported within days of landing in Bombay in September 1922. What he then did is unclear, although at some point, perhaps in 1924, Ashleigh landed back in Britain, where he now began to make a mark in intellectual fields.

Having experienced workers’ theatre in Soviet Russia, Ashleigh appealed in the January 1925 edition of The Plebs magazine for theatre groups to contact him. He aimed to produce a play Upton Sinclair had written about the Wobblies, `Singing Jailbirds’.

Ashleigh became an occasional reviewer for the Sunday Worker on the strength of his interest in theatre. He was the translator of ‘Eddie and the Gypsy’ published by Martin Lawrence, and did some stories for ‘Martin’s Annual’. Further to that he also wrote for Lawrence and Wishart’s ‘The Eye’ where he reviewed their children’s books and at one point was talking about a paperback series that sadly never seems to have happened.

Charles Cooper Born on June 5th 1910 in London’s East End, the ninth and youngest child of a kosher butcher from the Ukraine (the family name was Gralnick), Charles left school at 14 to follow […]

Charles Poulsen Poulsen, who died at the age of 89, was, at various times, a fur-nailer, taxi-driver, fireman, sub-­editor, novelist, dramatist, historian and poet, but his greatest achievements were as an autobiographer and lecturer.   […]

Charles Ringrose Born on September 24th 1908 in North London, Ringrose was the son of a bus conductor. In the 1930s, he worked for a charity for down-and-outs, which led him into the Communist Party. […]