Arthur McManus was born in Belfast in 1891 but within months his family relocated to Scotland. He was editor of the SLP journal, `The Glasgow Socialist’ and a fitter and member of the ASE. One of the leaders of the Clyde Workers’ Committee during the First World War, he was deported to Edinburgh on March 25th 1916 following the dispute which began at Beardmore engineering works in Parkhead, Glasgow and led to an almost total stoppage across the city, led by the CWC, from 17th March to 4th April 1916.

The strike was against the government’s war-time employment policies that imported cheap unskilled male and female workers to engineering and shipbuilding works. On the day he was internally deported, McManus was about to bring out the shipbuilders on that day and then go to Woolwich Arsenal and bring out the men there.

He took a prominent part in the engineers’ strike at Manchester in May 1917. He was the proposer of the “immediate Armistice” resolution at Sir Auckland Geddes’s meeting at Glasgow in January, 1917. On May 17th that year he was arrested for endeavouring to promote strikes and was brought to London, but was subsequently discharged. McManus was actively connected with the Clyde strike of January 1919. On 17th January, 1919, he was nominated one of a committee of 15, formed to act as a Central Committee in readiness for the anticipated coming revolution.

As a member of the Socialist Labour Party and a vociferous anti-conscription and anti-war agitator throughout the 1914-1918 period, he was also a regular visitor to Derby in connection with both shop stewards’ co-ordination and anti-war activity. There, he became a welcome visitor to Alice Wheeldon’s home (see separate entry), eventually marrying her second daughter Hettie. She was the SLP Derby branch secretary during 1919, living at 907 London Road, Derby.

In February, 1920, McManus applied for a passport, claiming that he was going abroad in a commercial capacity for a Manchester firm whose manager was a Bolshevist and had shielded Conscientious Objectors during the war. This was a ruse, since he had definitely been given instructions by the new Comintern to use this device to obtain a passport.

McManus signed the Manifesto on Communist Unity as the delegate for Derby SLP. This statement came from a conference of SLP members held on Easter Saturday and Sunday, April 3rd and 4th 1920, in Nottingham. Following this, he was Chair of the Party, a role perceived to be more than just chair of the Central Committee. It was a temporary two-year position that was seen as essential to mark the significance of the varying forces that constituted the new Party. Arthur went on to become a member of the executive committee of the Third International.

In the summer of 1920, Hetty and Arthur married in Brentford but soon they lived at 1 Beddington Terrace, Mithcam Road, Croydon, moving there so Arthur could play an instrumental role in the formation of the Communist Party. Unfortunately, she was to die in November 1920 after her and Arthur’s baby died in childbirth, she contracted appendicitis and the complications wore her heart down.

On August 9th 1922, when McManus was cited by the court as being 43 years old (he was probably 33) and living in the Old Kent Road, he was arrested on Walworth Road. Being discovered carrying Party literature, using the pseudonym of James Anderson, and being in possession of a revolver, he was sentenced to five weeks hard labour.

From December 1922 until August 1923,  McManus was away in Moscow, where he was a member of the Praesidium of the Comintern.

He was one of the 12 Communist Party leaders arrested on various charges of sedition and mutiny in 1925, to deprive the movement of clear sighted leadership ahead of the looming general strike. He received six months imprisonment after refusing an offer to walk free if he renounced the Party.

McManus died in Moscow of a serious illness in 1927, having been, as the Party statement put it, “in harness … up to the last”, attending a conference in Brussels to found the League Against Imperialism a week before he died.

Some of MacManus’s ashes were interred in the wall of the Kremlin in recognition of his role as a pioneer of Communism. The rest were repatriated and placed in Golders Green crematorium, after a grand ceremony organised by the British Communist Party.

The photograph of MacManus was taken in 1914. 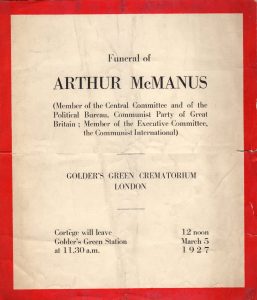