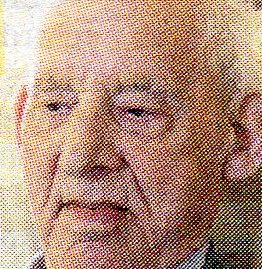 Born in Wandsworth in 1913, Arthur was the son of a postman and the former housemaid of the cricketer, WG Grace. Arthur left school at the age of 14 and started training as an artist, but after a year of mostly cleaning his tutor's brushes, he left to join the firm of Morgan Crucible and train as an electrician at night school. In the early 1930s, as a keen member of Balham Cycling Club, he won several road and track races and time trials. He married Violet White in 1936, joined the Communist Party in 1941.
During the latter part of the Second World War, by now with three young children, he was drafted into the RAF and posted to India. His role in the mutiny of the RAF personnel stationed there, who protested at the slow pace of demobilization and return to civilian life has been recorded in the books `The Days of the Good Soldiers’ by Richard Kisch and `Mutiny in the RAF’ by David Duncan. It was also the subject of a Channel 4 documentary in 1996 that was made with Arthur’s assistance.

, the British administration wanted to defer the demobilisation of the RAF personnel stationed in the sub-continent. But most RAF personnel were conscripts and many of the ground staff were from an engineering background and had trade union and political experience. Thus they had the ability to organise a campaign in spite of military discipline and the punishments that could arise from mutiny. Many were also sympathetic to the struggle against colonial oppression. There were also grounds for other complaints including bad food.

The campaign for demob started at the Drigh Road maintenance depot where Arthur Attwood was stationed. There a committee was formed and steps decided on by a mass meeting held in darkness so that speakers could not be identified. These tactics initiated from Drigh Road were repeated in a rolling campaign that enveloped most if not all RAF bases. The mutiny, which was effectively a strike, involved up to 50,000 men in 60 British air bases across India and South Asia.

Arthur Attwood was charged with being one of the ring leaders and was held in solitary confinement. But a massive campaign in both Britain and India ensued the pressure from which was instrumental in getting the Labour government to retreat.  On 3rd July 1946 the Government announced that all charges of incitement to mutiny in connection with the January events had been dropped.
After his release, he returned to work as an electrician, including spells at a number of film studios. While working at Shepperton studios, his daily cycling routine was disrupted by an accident. He was astonished, upon his return from unpaid sick leave, to find that the cast and crew of the film he was working on had made a collection for him, which included a £5 cheque from the star Stewart Granger.
Throughout he continued his involvement with the unions, including a period as a chapel father on Fleet Street, and later became a full time trade union official for the Electrical Trade Union. In the early 1960s, after the defeat of the Communist leadership of the union by a right-wing faction dominated by communist turn-coats, the rules of the union were changed, banning Communist Party members from holding office. Any ETU official who was a Communist was forced to resign from office or renounce their Party membership. Some had already been sacked, some sold-out; Arthur took a principled stand and resigned from office to return to his trade as an electrician, being very bitter about the lack of principle of some of his former comrades and colleagues.

Upon retirement, Arthur indulged his passion for walking, covering great distances, often with Violet or friends but sometimes alone. He walked the Pennine Way, part of Offa's Dyke, the Coast-to-Coast and the Shaftesbury Shuffle. The latter, conceived to raise funds for his chosen causes, started at his home in Oakley, Hampshire, and ended 60 miles away in Shaftesbury, Dorset. It would have been a challenge for most people but was one that he managed – at the age of 79 – in 20hrs 15min. He celebrated his 80th year by walking the 80 miles to Gloucester in 28hrs 7min. All this in spite of having heart problems that required surgery.  Arthur also spent time in retirement writing and drawing. When he died in 2008, aged 95, he left two daughters, Audrey and Carole, a son Peter, 10 grandchildren, 22 great-grandchildren and three great-great-grandchildren. Violet died in 2004, after 68 years of marriage.
Sources: Eric Trevett, Jim Gibb, Stewart Edgell, The Guardian, Thursday May 22 2008