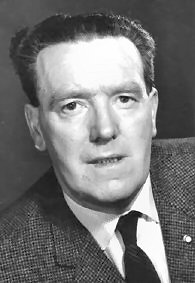 Communist and trade union leader in Northern Ireland, Andy Barr was born on 23rd September 1913 at 29 Cluan Place, off the Mountpottinger Road, east Belfast. He started his working life as an apprentice sheet metalworker in Musgraves on the Albert Bridge Road, where he was apprenticed to Sam McCoubrey, who became the district secretary of their union, He secured a clean job at the recently established Shorts aircraft works in 1938. He married Dorothy Adrain, a mill worker and shop steward at Ewarts Mill, in 1941. Barr was elected shop steward in 1942, in the same year he joined the Communist Party of Ireland. (His father had been involved in the Left Book Club.)

Barr stated, "I was just known as a militant shop steward in Shorts. People came to me when they were selling literature and I would have brought it: Unity, Labour Monthly, Daily Worker… I was reading all that stuff and I was becoming really interested in politics and joined the Party."

He was elected convenor at Shorts in 1946 and went on to make a massive contribution to the labour movement as a leader, known the length and breadth of these islands and beyond. He became chairman of the district committee of his union in 1947 and was elected to the Executive Committee in 1948. He was sacked in 1949 for holding a meeting of his members in Shorts during working hours. Another eight senior shop stewards were dismissed when they openly supported him. Then 10,000 workers in Shorts' five factories stopped work and all the shop stewards, including Barr, were reinstated. Barr was elected district secretary in 1953 and national president (Britain and Ireland).

In the later 1950s, Andy Barr played a prominent role in reuniting a divided Irish trade union movement into the Irish Congress of Trade Unions. He also campaigned for recognition of the ICTU by the Stormont Government, ultimately conceded in 1964. He promoted the Communist Party�s policy as contained in its 1962 programme and advocated and actively supported the ICTU's demands for democratic and economic reform. Barr supported the Northern Ireland Civil Rights Association and opposed the introduction of internment without trial.

When politicians characterised the civil rights movement as a communist-republican conspiracy, Barr's analysis was: "I don't think the party received full recognition of the part we played. We had many key people who devoted themselves almost full time to it. The CP played a very good role . . . One thing in particular, we tried to get the trade union movement to affiliate to NICRA. Of course we were not helped by some leftist elements among the republicans. That didn't help us. Communists were playing a very important role in the mass demonstrations, the discussions that took place over the place – communists were involved in them all and tried to influence the civil rights movement along sensible lines that could be accepted by the Protestant population. That's who we had to win to the civil rights struggle."

During the para-military and Orange-led Ulster Workers' Council stoppage of 1974, despite workers expressing through democratic meetings their opposition to the stoppage, many were forced out of work by the threat of violence. Andy Barr was involved in convening a meeting of a couple of hundred people in the AEU hall in the Port of Belfast. Everyone spoke against the UWC stoppage. Barr proposed that a march into the shipyard through loyalist blockades into the Harland and Wolff shipyard. One participant recalled: "We invited Len Murray, the general secretary of the TUC, to attend. Credit where credit's due: Len Murray turned up, but by that time the fear in the streets was palpable." Barr himself recalled: "We saw there was going to be difficulties, but we said let�s start, small and all in numbers as we are. We'll go through with it. And we marched through. I can recall very clearly taking off my glasses, as I knew they were going to be a liability, and we formed up in the front row."

In 1974, Barr was finally elected president of the all Irish Congress of Trade Unions, Ireland's TUC, a position long denied to Communists by the trade union hierarchy. On his election he said: "I think it is the highest honour that can be paid to any trade unionist. I have never sought honour from other than my own class "the working class."

Barr remained active in retirement, participating in education classes in the Fold, where he lived in Bangor, and campaigning on a range of local and international issues including opposition to the invasion of Iraq only a few weeks before his death in March 2003.

Sammy Barr Born December 20th 1931, as Samuel Alexander Barr, he began working in the shipyards of the Clyde as an apprentice welder with Charles Connell and Company in Scotstoun when he was 15 years […]

Howard Keith Andrews was known affectionally as `Andy’ for most of his adult life; he was born in Kilburn, north-west London, on February 15 1907. His father was a soldier and his mother had taken […]

Andy McMahon Born on March 18th 1920, he left school at 14 and was apprenticed as a carpenter at Fairfields shipyards. Joined YCL in his teens and then, in the 1940s, the Communist Party, in […]