Allan Merson was born on August 26th 1916 in Northumberland, the son of a garage proprietor. He was a brilliantly successful pupil at Newcastle Royal Grammar School. In 1934, he went up to Balliol College, Oxford, to read history, where he met his lifelong friend, Christopher Hill, four years his elder. Impelled in part by the war in Spain, he joined the Communist Party and remained committed to this for the rest of his life.

After graduation, he went on a scholarship as an English assistant in a German school in Warzburg just as the Nazis were taking over Austria. On his return, for a while, he was a civil servant and then served during the Second World War in military intelligence, spending two and a half years in Iceland. Here, he edited a forces' newspaper and was in contact with Icelandic Communists and deeply involved in the British Communist organisation in the military. He later served in France, Belgium and Germany ending up as press officer for the British occupation administration in North Rhine Westphalia and also Berlin. He was demobilised as a major and married an Icelander at this time, later remarrying for a second time to Betty, who was a long-standing activist in CND.

In 1946, he was appointed a history lecturer at the University College of Southampton, where he remained until early retirement due to ill-health in 1977. He edited three volumes of the `Third Book of Remembrance of Southampton (1514-89) between 1952 and 1965 and attained acknowledgement as an expert on the English Revolution of the 17th century.

Merson wrote widely on history for Party journals; he was an especially devoted member of the Historians' Group of the Communist Party and produced several `Our History' pamphlets. These included `Town Privileges and Politics in Tudor and Stuart England' (1958), `Problems of the German Anti-Fascist Resistance 1933-1945' (1966) and `The Nazis and Monopoly Capital' (1973). A book published in the mainstream, `Communist Resistance in Nazi Germany' (1985) was a scholarly yet politically committed work. Printed also in German in Germany, it is widely regarded as the best study of the subject to date.

A Marxist education tutor for the Party, member of the Hampshire and Dorset District Committee, he was a fully involved member of the Southampton branch throughout the post-war period and was a committed member of the re-established Communist Party of Britain when he died, aged 7 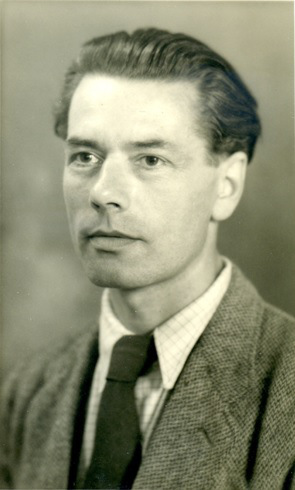 Allan Merson, my step-father, was a lifelong member and supporter of the CPGB, locally in the Southampton area and nationally through his membership of the Party’s History Group for which he wrote pamphlets and participated in discussions. He had kept his correspondence since before World War Two, in the form of letters written to him from comrades, colleagues and friends with occasional copies of replies of his own and also letters he wrote from East Germany where he was researching in the 1960s and 1970s.

In late life he wrote accounts of his wartime service in army intelligence in occupied Iceland, a short period at Woburn Abbey (part of the Bletchley Park organisation), and when Press Officer for the British Occupation Administration in occupied France and Belgium. The collection seemed to me to provide a valuable resource relating to a CPGB activist whose politics were at the heart of his life, both personal and, in his case, academic.

In 2012 I offered the correspondence and papers to the CPGB archives at the People’s History Museum in Manchester. They accepted the collection and prepared the papers for accession. A volunteer at the Museum has since written a blog which provides a brief biography which can be found at:

Picture from the above

Allan Eaglesham Born on 23rd August 1902 in Dumfriesshire, the son of a clergyman, he joined the Communist Party at the age of 18 in October 1920, as he went to Edinburgh University to study […]