Alice Cousins (nee Lucas) was born on 16th June 1903 in Bellshill, Scotland. She came from a Lithuanian family, her parents having come to Scotland as children; indeed the name `Lucas’ was one suggested by convent nuns to hide their real origins. 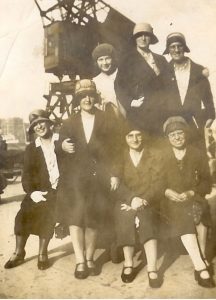 Alice and her three sisters lost their mother when young – she was 15 years old. Her father was a coal miner, the classic man of talent when sober, who could hand-make both perfect shoes and clothes. Her sister Mary and herself moved to England and employed their needlework skills as tailoresses. Alice was to meet her future husband, James Cousins, known as Jimmy, in the ILP but was to join the Communist Party shortly after its formation. She and Jimmy married in 1926 or 1927. (See separate entry for James Cousins) Whilst living in Woolwich, Alice and James had their first child, Elsie, in 1930. (See separate entry for Elsie Oliver.) Their son, Wal, was born in 1933 and named after Wal Hannington, who was imprisoned at the time.

Jimmy and Alice were both active in a wide range of aspects of the co-operative movement, Alice also being involved in the Women’s Guild. She worked at Briggs Motors, later part of the Ford Group, during the Second World War. She was also a member of the AEU, being a member of a committee dealing with workplace compensation matters.

Dagenham Co-operators on the march 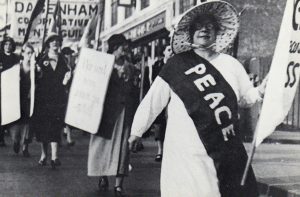 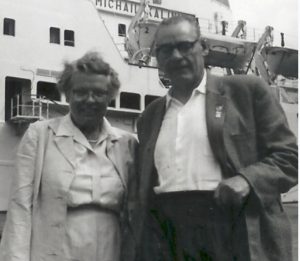 Alice with Wal Hannington in front of the Soviet “peace boat”, after the second world war

Nancy Cousins   It is a matter of record that Nancy, the wife of Frank Cousins, the General Secretary of the TGWU from 1955-68, was a fully-fledged, card carrying member of the Communist Party’s Yorkshire […]

Alice Wheeldon Although Alice Wheeldon actually died before the Communist Party was technically formed, she deserves to belong to a Compendium of Communist biographies simply by virtue of what became of her. There seems little […]