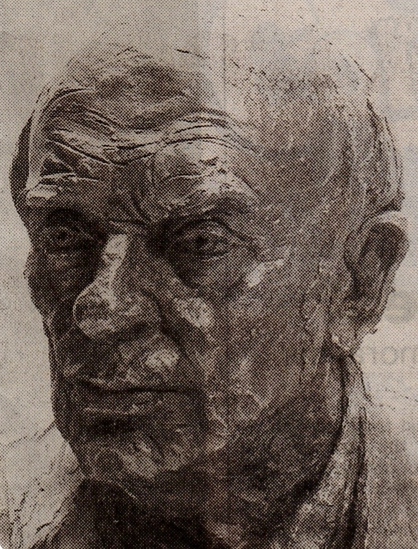 Left: Alan Bush wrote the music for the 1934 Pageant of labour

Right: A bronze of Alan Bush by Ian Walters

Alan Dudley Bush was born in Dulwich on 22 December 1900. As a student at the Royal Academy of Music from 1918 to 1922 he won several prizes both as pianist and composer, after which he continued his studies as a composer with John Ireland and as a pianist with Benno Moiseivitch, Mabel Lander and Artur Schnabel in Berlin. He later returned to the Academy as a professor of composition, where he taught several generations of British composers as professor of composition at the Royal Academy from 1925-78

Another close mentor, from around 1915, was Rutland Boughton (see separate entry), a famous composer. In 1924, Bush joined the Independent Labour Party and a year later he became actively involved in the London Labour Choral Union, which Boughton had founded. In 1929, Bush entered Berlin University to study Philosophy and Musicology but his work towards a degree was cut short by the depression and the threatening rise of Hitler fascism. He returned to London in 1931 and within two or three years was profoundly committed to Marxism, joining the Communist Party in 1935. In 1936 he helped found the Workers Music Association, of which he was chair from the beginning until he became President in 1941 continuing in this role until his death in 1995. He was also WMA Director of Studies at each successive WEA Annual Summer School until 1975.

Alan Bush had early success as a professional composer with his String Quartet, op. 4, which was given a Carnegie award in 1925. Bush is credited with over a hundred works of composition, including his best known work, Dialectic (1929), op. 15, for string quartet, which followed his debut piece, Relinquishment (1928). This helped establish his reputation abroad when it was performed at the Prague International Society for Contemporary Music Festival in 1935. He also founded the London String Orchestra in 1938 and continued to be associated with it up to 1952. Much of his pre-war music was written the most advanced of European idioms of the time. Later, he developed the idea of a `national’ style that was simpler, intending to make the music more accessible to a wider audience.

The Workers’ Music Association acted as an organisational body for events, and as a publisher of working-class songs (both historical songs and newer songs written by contemporary composers). In 1934 Bush wrote the music for a theatrical pageant The Pageant of Labour at Crystal Palace. For 1938, a much bigger series of events was planned which included a production of Handel’s Belshazzar, a large pageant at Wembley Stadium, and a Festival of Music for the People staged at the Albert Hall. For the event at Wembley Stadium Bush wrote his Pageant of Co-operation to a scenario by Montagu Slater and Andre van Gyseghem (Bush, together with Slater, Gyseghem and Randall Swingler – see separate entry) were prime movers in mounting these mass pageants). The work was performed on 2 July 1938 by members of the London/South Suburban/Watford Co-operative Societies with the speaking parts and ensemble directed by Bush.

His Truth on the March (1940) reflected the historical moment but, in the early stages of the second world war, he was banned – amongst others – from performing for the BBC for signing up to the Peoples Convention, although this was later lifted. Later, Bush was in the army, for the RA Medical Corps, from 1941-5. He produced four symphonies, one of which was inspired by the 1930s economic crisis and another by the Lascaux cave paintings. In the immediate post-war period, he produced The Winter Journey and Lidice (1947), which brought the story of how the Nazis had liquidated the very existence of a Czech village which had been the centre of resistance that was now in the process of reversal by the post-war socialist state there.

His operas all have themes of social significance and the words of six of seven operatic works were written by his wife, Nancy Bush (see separate entry). In 1947 the collaboration in the field of full-length opera between Nancy and Alan began with Wat Tyler, a dramatic story of the Peasant Rising of 1381. Our Song, to a text by Nancy, was commissioned for the opening of the Nottingham Co-operative Arts Centre and was first performed by the Workers’ Music Association Singers, conducted by the composer in 1948.

In 1949 the newly-formed Arts Council announced that it would commission a number of full-length operas in connection with the Festival of Britain. Composers were to compete under pseudonyms. At the time of the announcement it was carefully stated that no production could be guaranteed. Four works were commissioned under the scheme and one of these was Alan and Nancy Bush’s Wat Tyler. In the event, none was performed in Britain at the time of the Festival.

Wat Tyler did, however, achieve great success in Germany: it received two studio broadcasts from Berlin in 1952 and these led to a stage production in Leipzig during the 1953-4 season. This first run comprised 14 performances and the opera was revived again in the following season. In addition Bush received three further operatic commissions from German theatres. Other well-known operas of Bush are the Sugar Reapers, Men of Blackmoor, Joe Hill, the Man Who Never Died and Guyana Johnny; whilst Voices of the Prophets was more of a choral piece (1953). Africa is My Name also appeared in the 1950s.

Whilst always well thought of in Eastern Europe, under socialist governments, his ability as a composer was never given much scope for performance. A series of BBC programmes in the 1980s at last gave Bush the recognition he deserved as a British composer of distinction. Reflecting this, perhaps, Bush produced his last major composition, Six Short Piano Pieces (1983). Alan Bush died in 1995.

Alan Rickman Alan was born and bred in Birmingham, and joined the Communist Party in 1946 on his return from wartime service. He was a keen cyclist, winning many awards for his speed as a […]

Alan Tattam   Tattam was a long-standing Communist and an active member of the Woodworkers Union (ASW) and later UCATT. A London activists, he was victimised on many jobs for his determined defence of his […]

Ray and Alan Garner   Ray Garner and his identical twin brother Alan were born fifteen minutes apart on the 5th June 1929 at the Bath Road Nursing Home, Wolverhampton. They were easily distinguishable to […]